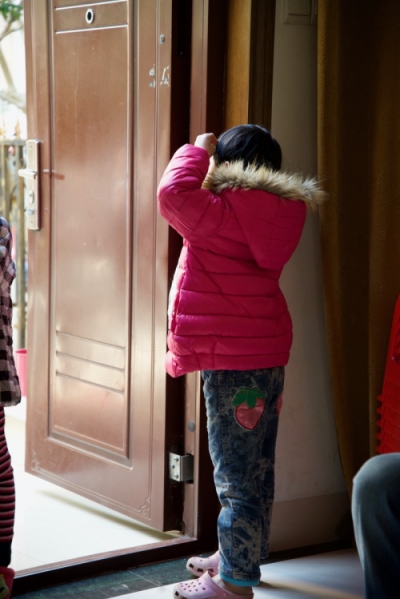 Most of the children here don’t know they are HIV+. It’s too risky.

Their teachers don’t know. Their neighbors definitely don’t know because if they did, they would have to move again. They’ve moved eight times in ten years, all 28 children. If their teachers knew, they would be isolated and discriminated against or even kicked out of their pricey private school — a school they attend because they don’t have to inform the principal of their disease.

Most of these children don’t even know about the disease in their blood, the disease that killed many of their parents, robbed them of their life in their villages and that was likely passed to them at birth.

They just know that they have strict rules to follow.

Absolutely no fighting. No rough housing. If they get a cut or a scratch, they have their own first aid kit. And they have Mr. Huang.

“The kids are happy now,” Mr. Huang says, his face worn and tired, his spiky, graying hair hinting at his age.

When children pass through the living room of the apartment, they stop to grab his hands or talk to him and his eyes soften as he greets them lovingly.

“They are too young,” Mr. Huang says. “They don’t understand their fate. But as they get older, they will learn. The discrimination will start. They will always have to keep their secret.”

In China, few people understand HIV well, and the disease is highly stigmatized. 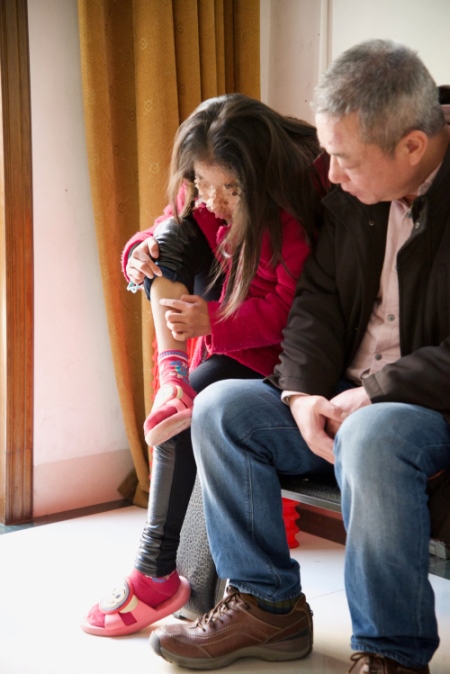 Twenty years ago, HIV ravaged entire communities and spread rapidly through both rural and urban areas. Many people died. Today, it is much better controlled, and the government provides a free supply of the daily antiretroviral medication that people living with HIV need to survive. However, public awareness about how HIV is spread remains misunderstood. Schools won’t accept children with HIV, and neither will apartment landlords nor state-run orphanages. Many children with HIV are orphaned or abandoned, and while most have extended relatives, family members are often unable or unwilling to welcome their grandchildren or nieces or nephews with HIV into their homes.

“Sometimes in the village, the adults will steal the children’s medication and eat it,” Holt’s vice president of China programs says, her face in an animated smile at a cute and bouncy 2-year-old boy whose life is about to change. His adoptive family in the United States is coming after Chinese New Year to take him home. “The villagers think the medicine is a miracle drug — that if they take it, they will be safe from all diseases.”

Children live in one of two narrow six-story apartments located across a thin community courtyard from each other. The older kids live in one apartment together, with a homework and craft room in the garage, a shared living space, a computer lab with three new donor-purchased computers, and several bedrooms separated for boys and girls with six bunks each. The second apartment is identical, but more tailored for toddlers and babies. Pictures of each child line the stairways in hand-made frames. They smile in candid shots of them riding bikes or playing in the park. One room features a wall covered in photos of children with their American families. The other wall features the kids who are still waiting. There are eight children waiting now — children who are young enough to be matched with an American family and very nearly cleared for adoption.

“The sooner and younger we can find these kids a home, the better,” Mr. Huang says. “There is no life for them in China. It will be a life of pain. They will never have a family here.”

But at the group home, the kids seem happy. Unlike kids we meet at other group homes for children, these kids don’t seem starved for attention. In fact, they barely acknowledge the presence of two American visitors.

Here, children with HIV receive high-quality and adoring care. Caregivers are hard to find, and in almost every case, they came to the group home by word of mouth. Some have HIV themselves, but nobody talks about who does and doesn’t have the disease. However, the secret they keep together seems to bring them all closer. The caregivers and kids seem extremely close-knit. Their care is excellent and the home environment as loving as possible.

Recently, one Holt donor — moved by a waiting child story about a girl who just wanted to learn how to ride a bike — decided to instead send nine bikes for the children in care at this group home. The children are almost constantly riding them around the sprawling apartment complex. Some girls are reading books, while another is building small model homes out of toothpicks.

The kids are having a barbeque this evening. In one of the apartment’s garages, they’ve opened the door and they are blasting Chinese pop music on a cell phone. The kids are all sitting on little step stools around three charcoal grills. On a nearby table, an assortment of hot dogs, and tofu, chicken and duck kabobs are waiting to be grilled.

It’s a warm, fun day right before New Year’s celebrations begin, and the kids are giggling and laughing like the most normal, healthy kids in the world.

But, the reality is, every child here has already experienced tremendous loss and pain. They’ve already lost their family — sometimes because they died, sometimes because of stigma. For one 7-year-old girl, that loss is still fairly new. She’s been here less than a year. Many children who live here started life in a rural, lush mountainside village and now live in bustling Nanning, a city of more than 6 million. Some may already understand why they are here now, but most don’t.

When they turn 12 years old, if they haven’t already been matched with a family, Mr. Huang will talk to the kids about their disease.

At any time, Mr. Huang fears that a neighbor might learn their secret, and they will all have to move again — somewhere far enough away in the city that they are unlikely to run into someone who knows them.

The cost to care for each child at this group home is very high. Mr. Huang must provide everything, from rent and food and clothes to their private school fees, which costs more than 8,000 rmb per year, or more than $1,000 per child.

In addition, these kids need expensive medical care for the many health needs associated with HIV, like pneumonia or treatment for hepatitis. While antiretroviral medicines are covered by the government, no other associated health care costs are covered.

And, Mr. Huang has to pay caregivers who cook for the kids, help them with homework, take them to school and basically create the most home-like environment possible.

Sometimes, the government will ask Mr. Huang to take in a child who has HIV from a nearby orphanage. For those kids, Mr. Huang will receive some financial assistance per month — about 1,000 rmb, the same amount allocated for all kids in orphanage care, about $150 per month.

But not all kids here are referred by orphanages. Some come directly from the countryside or from parents wishing to relinquish them. For these kids, Mr. Huang receives no government help.

Now, Mr. Huang depends on the kindness of Holt donors to keep these children safe. Holt donors are heroes to children in the HIV group homes, because they provide everything the children need to have relatively normal lives. Donors pay rent for the home they live in, provide each child new clothes, school supplies and bedding, ensure every child has caregivers, regular meals and consistent medical care. Without compassionate, kind and loving donors, these kids would have no where to go, no one to care for them and no hope for their future.

Mr. Huang started working with people who were HIV+ in China many years ago, after the first medicines for those with the disease became available. Mr. Huang’s job was to distribute medicine to those who needed it. Through his work, he was connected with Doctors Without Borders, a nonprofit organization that dispatches doctors to remotes and underserved regions around the world, both to provide care and to spread medical knowledge.

Under Doctors Without Borders, Mr. Huang connected physicians with HIV+ patients. In turn, Mr. Huang learned a lot about the disease, much more than ever before. He learned that antiretrovirals could virtually prevent the disease from spreading if they were taken properly and regularly. He learned that common misconceptions about HIV in China were simply untrue: the disease can’t be spread by physical touch, saliva or through the air.

In fact, HIV is a puny disease — generally spread through sexual contact, childbirth, the exchange of blood or sharing of needles. He also learned how many people in rural villages continue to contract the virus today.

Twenty years ago, many people became infected with HIV through blood transfusions, since blood was rarely screened for disease. Now, however, it’s mostly contracted through intravenous drug use.

In the Golden Triangle, opioids like heroin are still common. And drug pushers rely on rural customers to maintain their profit margins. In areas where knowledge about drug use is low, drug traffickers will come to a village and say they want to throw a big party for the people. During the bash, they’ll introduce their product, hoping to trick people into trying the drug for the first time and get people hooked. They don’t care how addiction can destroy families or how disease can impact entire communities. They certainly don’t stop to care about the children left behind.

These kids will face discrimination in every aspect of their lives — from the schools they are able to attend to the jobs they can hold. People will literally avoid sharing their air out of fear.

In their rooms, children’s bedding is folded neatly at the ends of their bunks. Some have pillows or stuffed animals. Their toothbrushes and clothes are arranged in neat little rows.

By all means, it’s a beautiful, homey space — not at all the stereotype of an orphanage. It’s bright, clean and feels like a normal home. But as caregivers dip in and out of rooms, tidying up toys and delivering stacks of clothes many of them share the same sentiments as Mr. Huang. While they are happy these children have a safe place to live, they hope that eventually every child living here will leave — not to enter Chinese society on their own, but to a home in the United States.

At least for now, one slender, 20-something young male caregiver tells us, there is no future here for these kids.

“China is no place to have HIV,” he says. “Maybe one day that will change, but until it does, life here will be hard.”