A rapid, one step test for the qualitative detection of THC metabolites in human urine.

The Single Urine Dip and Read Test is an economical, fast and accurate way of testing for one drug at a time. The product is easy to use and results can be read at 5 minutes.

Marijuana, Cannabis or tetra-hydro-cannabinol (THC) is a hallucinogenic agent derived from the flowering portion of the hemp plant. Smoking is the primary method of use of marijuana/cannabis.  The agents of Marijuana that cause various biological effects in humans are called cannabinoid. Cannabinoid is a central nervous stimulant that alters mood and sensory perceptions, produces loss of coordination, impairs short term memory, and produces symptoms of anxiety, paranoia, depression, confusion, hallucination, and increased heart rate. Large doses of cannabinoid could cause the development of tolerances and physiological dependency and lead to abuse. A tolerance to the cardiac and psychotropic effects can occur and withdrawal syndrome produces restlessness, insomnia, anorexia and nausea. Δ9-THC is the primary active ingredient in cannabinoids. The main metabolite excreted in the urine is 11-nor-Δ9-THC-9-COOH, which are found within hours of exposure and remain detectable in the urine for 3-10 days after smoking. 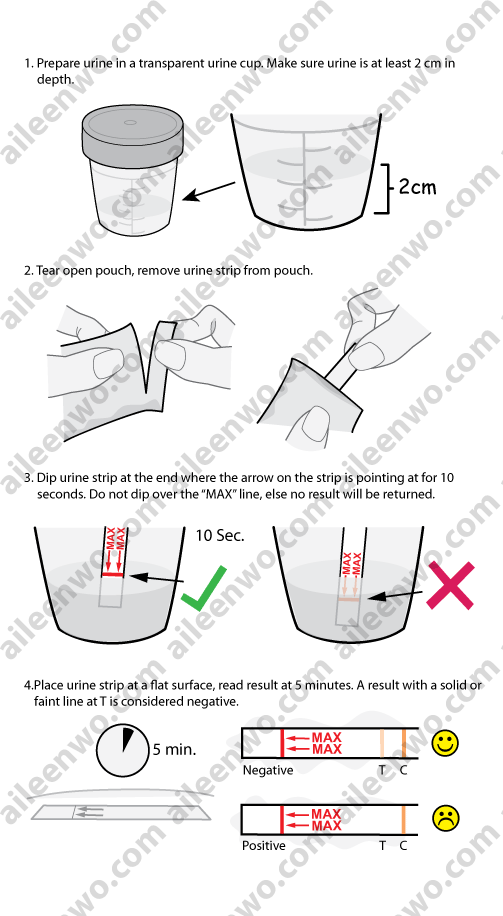 Control band fails to appear. Results from any test which has not produced a control band at the specified read time must be discarded. Please review the procedure and repeat with a new test. If the problem persists, discontinue using the kit immediately and contact your local distributor.