The reagent is used for the qualitative detection and laboratory screening of hepatitis B virus markers
(HBsAg HBsAb HBeAg HBeAb HBcAb) in serum/plasma and whole blood.

Hepatitis B is an infectious disease caused by the hepatitis B virus (HBV) which affects the liver. It can cause both acute and chronic infections. Many people have no symptoms during infection. Some develop a rapid onset of sickness with vomiting, yellow skin, feeling tired, dark urine and abdominal pain. It may take 30 to 180 days for symptoms to begin. Cirrhosis and liver cancer may eventually develop. These complications results in the death of 15 to 25% of those with chronic disease.
About a third of the world population has been infected at one point in their lives, including 240 million to 350 million who have chronic infections.Over 750,000 people die of hepatitis B each year. The disease is now only common in East Asia and sub-Saharan Africa where between 5 and 10% of adults are chronically infected.

The virus is transmitted by exposure to infectious blood or body fluids. Infection around the time of birth or from contact with other people’s blood during childhood is the most frequent method by which hepatitis B is acquired in areas where the disease is common. In areas where the disease is rare, intravenous drug use and sexual intercourse are the most frequent routes of infection. Other risk factors include working in healthcare, blood transfusions, dialysis, living with an infected person, travel in countries where the infection rate is high, and living in an institution.

Storage and Expiry
Store as packaged in the sealed pouch at 4-30°C, avoid hot and sunshine, dry place, valid for 24 months.

DO NOT FREEZE. Some protective measures should be taken in hot summer and cold winter to avoid high temperature or freeze-thaw.

Sample Requirement
1. Collect venous blood a clean and dry container according to the standard method. Separate the serum or plasma for testing. EDTA, sodium citrate, sodium oxalate, heparin can be used as the anticoagulants
2. After collection, separate the serum and plasma as soon as possible, in order to avoid hemolysis. (only for serum/plasma test kit)
3. Use fresh samples. Samples may be stored at 2-8℃ for 3 days, and should be stored at -20 ℃ if cannot be tested immediately. Do not freeze and thaw the sample repeatedly.

Test Procedure
Instructions must be read entirely before taking the test. Allow the test device controls to equilibrate to room temperature for 30 minutes (20℃-30℃) prior to testing. Do not open the inner packaging until ready, it must be used in one hour if opened (Humidity: 20%~90%, Temp: 10℃-50℃)
1. Take off the outer packing, put the cassette onto the desk with the sample window up.
2. Open the alcohol pad, use the alcohol pad to disinfect the finger where to be prinked. (Note: Before blood collection, make sure the finger is clean and dry)
3. Open a lancet and prick the finger, collect blood with a pipette.
4. Drop 2 drops (50μl-60μl) of serum/plasma/whole blood vertically into each sample hole of cassette with a pipette. Add about 2 drop of buffer (55-60μl) sample buffer from the centrifuge tube with the other pipette into each sample hole of cassette.
5. Observe the test results immediately within 15-20 minutes, the result is invalid over 20 minutes. 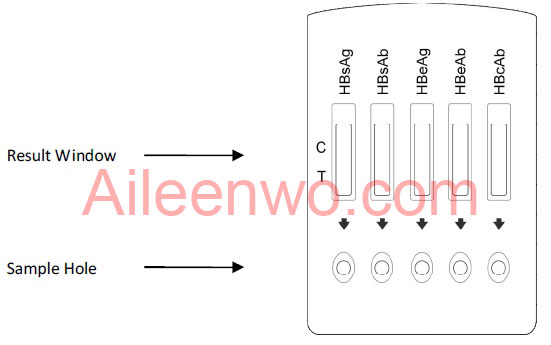 Result Judgment
HBsAg HBsAb HBeAg：
POSITIVE: Two distinct red lines appear. One line should be in the control region (C) and the other line should be in the test region (T).
NEGATIVE: One red line appears in the control region(C). No apparent red or pink line appears in the test region (T).
INVALID: No red lines appear or control line fails to appear, indicating that the operator error or reagent failure. Verify the test procedure and repeat the test with a new testing device.

HBeAb HBcAb:
POSITIVE: One red line appears in the control region(C). No apparent red or pink line appears in the test region (T).
NEGATIVE:. Two distinct red lines appear. One line should be in the control region (C) and the other line should be in the test region (T).
INVALID: No red lines appear or control line fails to appear, indicating that the operator error or reagent failure. Verify the test procedure and repeat the test with a new testing device.

Precaution
1. The test result is invalid over 20 minutes, do not use after the expiration.
2. Samples may be stored at 2-8℃ for 3 days, and should be stored at -20 ℃ if cannot be tested immediately. Do not freeze and thaw the sample repeatedly.
3. The strength of the quality control line doesn’t indicate the quality problem of the reagent, a test result that is clearly visible demonstrates the reagent is effective.
4. Both deep and light color may occur during the test, even a very light brand during observation time should be judged as negative a result.
5. If the filtration speed is very slow or even no filtration occurs, please change the sample and test again.
6. Do not use other kinds of quality control sample to test the reagent. Components of different batches cannot be exchanged for use to avoid erroneous results.

Helicobacter pylori, also known as H. pylori, is a bacterium that is commonly found in the stomach. It is present in approximately one-half of the world’s population.

The vast majority of people infected with H. pylori has no symptoms and will never develop problems. However, H. pylori is capable of causing a number of digestive problems, including peptic ulcers and, much less commonly, stomach cancer. It is not clear why some people with H. pylori get these conditions and others do not.

To protect yourself from developing stomach ulcers, check your partner for belching, burping, burning in the stomach that gets more severe when the person is hungry and better after eating, a white-coated tongue, a chronic sore throat, and mouth odor. Any person with these symptoms should get a blood test for helicobacter, and if positive, he or she should get an upper GI series X ray to rule out stomach cancer also caused by helicobacter. The person can be cured by taking three medications for just one week. We can now add helicobacter infections and stomach ulcers to the list of sexually transmitted diseases.

Most individuals with chronic gastritis or duodenitis have no symptoms. However, some people develop more serious problems, including stomach or duodenal ulcers.

Ulcers can cause a variety of symptoms or no symptoms at all, with the most common ulcer symptoms including:

●Pain or discomfort (usually in the upper abdomen)

●Feeling full after eating a small amount of food

●Ulcers that bleed can cause a low blood count and fatigue

Less commonly, chronic gastritis causes abnormal changes in the stomach lining, which can lead to certain forms of cancer. It is uncommon to develop cancer as a result of H. pylori infection. Nevertheless, because so many people in the world are infected with H. pylori, it is considered to be an important cause of stomach cancer. People who live in countries in which H. pylori infection occurs at an early age are at greatest risk of stomach cancer

Most cases of H. pylori infection occur without any symptoms during childhood and are most commonly associated with poor sanitary hygiene — that is, not washing your hands thoroughly after using the toilet.

Is H Pylori Contagious From Person to Person?

1. The reagent can be used for the serum, plasma and whole blood samples.
2. A serum / plasma / whole blood sample must be collected in a clean and dry container. EDTA, sodium citrate, sodium oxalate, heparin can be used as the anticoagulants. Detect immediately after collecting blood. If blood coagulation occurs, serum samples are suggested to use.
3. Samples may be stored at 2-8℃ for 1 week prior to assay, and at -20 ℃ for 2 years. Frozen refrigerated samples should be recovered to room temperature before detection and thoroughly mixed. Repeat freeze and thaw for no more than 3 times. Samples exhibiting visible precipitates, stinkor muddy should not be used. Centrifuged, filtered, or allowed to settle to obtain a clear sample for testing.
4. Use the fresh whole blood samples.

POSITIVE: Two distinct red lines appear. One line should be in the control region (C) and the other line should be in the test region (T).
NEGATIVE: One red line appears in the control region(C). No apparent red or pink line appears in the test region (T).
INVALID: No red lines appear or control line fails to appear, indicating that the operator error or reagent failure. Verify the test procedure and repeat the test with a new testing device.

Chlamydia Test Kit is a special urethra swab test kit designed to detect chlamydia infection. This kit is easy to use at home and gives you a high clinical accuracy result in just 15 minutes. Chlamydia is an infection caused by the bacterium Chlamydia trachomatis. It is the most common sexually transmitted infection in the United States. Chlamydia can infect the penis, vagina, cervix, anus, urethra, eye, or throat.

The incubation period of Chlamydia is several days to several months, usually 1 to 3 weeks.

In fact, 70% to 80% of women and 50% of men among the infected patients show no clinical symptoms, so that it is important to have a laboratory diagnosis. 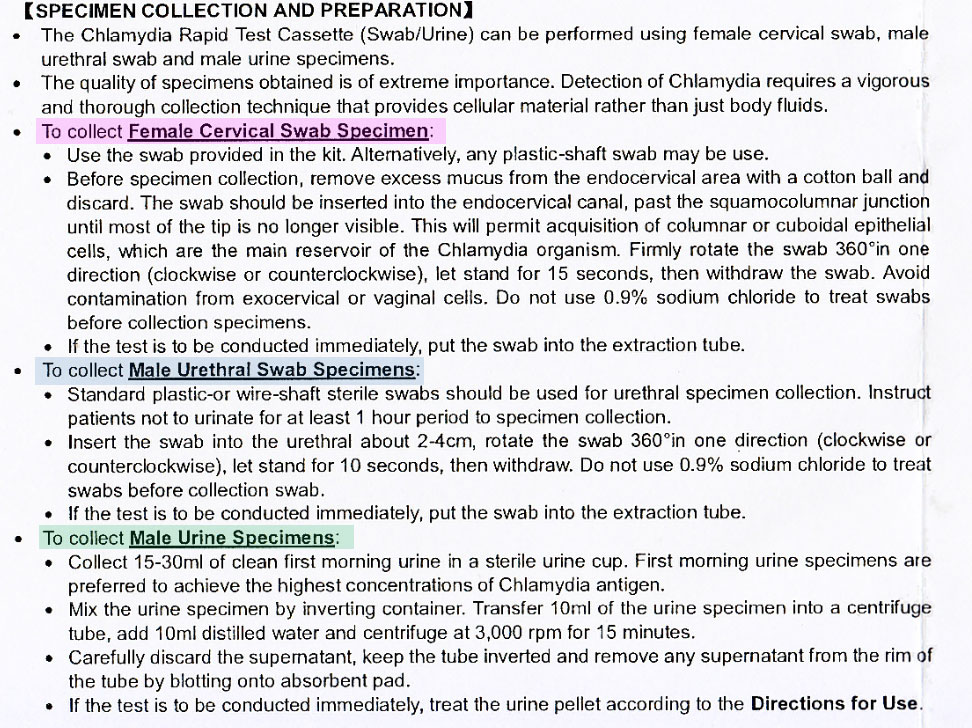 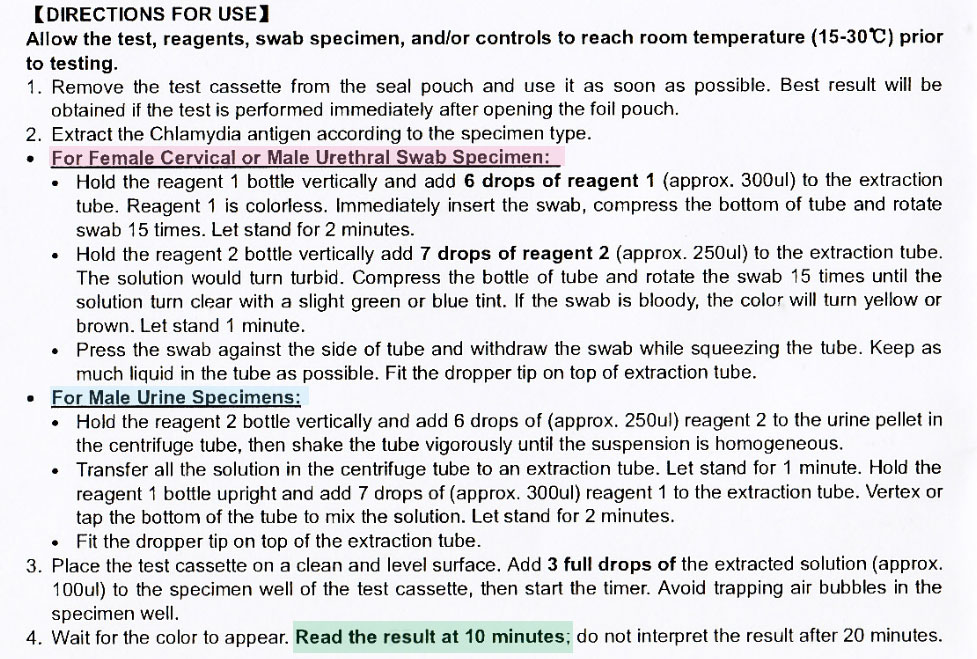 What To Think About

Other sexually transmitted infections may be present at the same time as chlamydia. So it is important to be tested and treated for all STDs. Chlamydia as well as other STDs can also increase the chance of getting human immunodeficiency virus (HIV). An HIV test may be offered at the same time as a test for chlamydia or other STDs.